Culpeper, Va. – October 1, 2022 – Hunter competition took center stage on Saturday during the HITS Culpeper Finals at Commonwealth Park. Once again, Isabella Bertozzi claimed the winning title in the $2,500 USHJA National Hunter Derby, this time aboard her veteran partner North Shore. Although it was Bertozzi’s first Hunt & Go Derby, she stayed smooth under pressure to lead the class from start to finish with her talented mount.

In the Hunt & Go style derby at HITS Culpeper, each horse and rider combination completes their first-round classic round, and immediately continues on to the handy round. The course featured two high options in the classic round and two in the handy, as well as a tight rollback to the final broken line.

“I've never done a hunt and go before, but I just kept going and just rode the rest of the course like a handy, and it worked out very nicely,” noted Bertozzi. “We had to do some tight rollbacks, and we ended with a broken line, and it was a sharp turn. My horse rode up to it beautifully and jumped out of the line really well!” 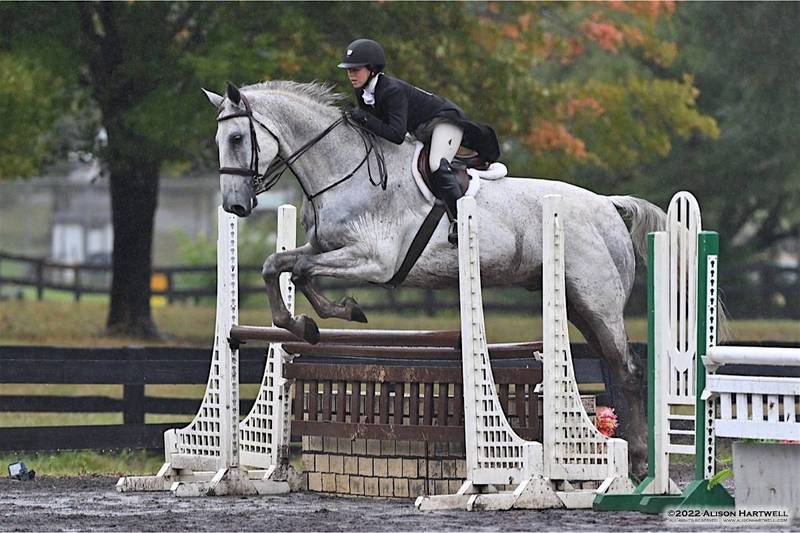 North Shore is a 9-year-old Dutch Warmblood gelding that Bertozzi began riding three years ago. The gentle giant is nicknamed Sully after the Monster’s Inc. character, and the pair normally compete in the equitation division, making the handy part of the derby their specialty.

“He is super adjustable and sensitive,” said Bertozzi. “He does not ride like a big horse at all. He is so sensitive and adjustable – the second I ask him to do anything, he will immediately do exactly what I say. That is really helpful when it comes to the equitation and the handies.”

Bertozzi rides out of her family’s Cavallo Farm in Leesburg, Virginia, and has been coming to Commonwealth Park since she was a young child, so ending the season with a big win was extra special. “We went into this weekend knowing that the weather was going to be iffy, and we had no idea what we were going to be able to show in,” she concluded. “It was nice to be able to do my one round and end up winning it – that was a nice way to finish the season!”

The second-place award went to junior rider Olivia Carmouche of Newark, DE, who was aboard Henri VH Akenhof. Rounding out the top three was Judy Schaefer of Baltimore, MD, riding her own Oslo.

Sunday marks the final day of hunter competition during the HITS Culpeper series, but plans are already underway for the 2023 show season! Exhibitors can also join HITS in Ocala, Florida, for the 2023 winter show season at HITS Post Time Farm. For more information and the complete class listing visit www.hitsshows.com.